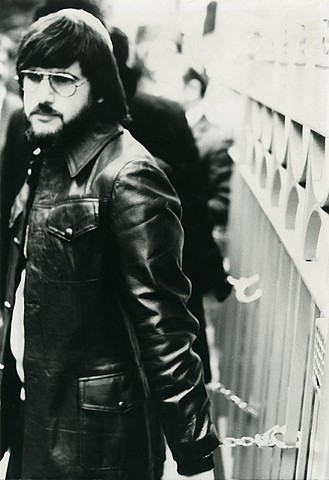 My father had been politically active since the 1960s starting with the civil rights movement, moving onto demonstrations against the Vietnam War. In this photo taken in 1977 San Francisco in front of the Soviet Consulate he was protesting the imprisonment of Natan Sharansky a Soviet-born Jew who became a Refusenik after being denied an exit visa to Israel in 1973. The refusal prompted Sharansky’s human rights activism and later affiliation with the Soviet Dissident Movement. Here my father has handcuffed himself to the Consulate gate.

After the Rodney King Riots, around the greater Los Angeles area, African-American churches had covenant relationships with Jewish congregations for healing. Paradise Baptiste Church had such a relationship with Temple Emanuel where my father was rabbi. They had shared worship services and exchanged programs. I remember my dad taking the family to a shelter in South Central that was part of the Paradise Baptiste Church’s feed the homeless program. I also remember his work with Dr. Aaron D. Iverson, their Pastor, and going to a service at the church where I first heard black Gospel – one of the musical genres I collect on vinyl today.

When I was in high school my dad supported my volunteering with organizations like the October 22nd Coalition to Stop Police Brutality, Black Star Collective, La Resistencia and other such causes.